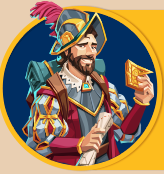 The fog of war vanishes for a moment and opens a path to the kingdom of Berimond.

A realm where the lion clashes with the bear. Where the “Gold Lion” of house Gerbrandt, Leopold III and the “Bear of Berimond”, Grimbert of the house of Ursidae call their bannermen to the battle for supremacy. Now the last hope for the Kingdom of Berimond rests on your shoulders, as you have to choose which apex predator you’ll support in their conquest. But choose wisely, since your enemy will fight you relentlessly until the bitter end.