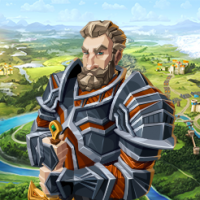 Unlocking the true potential of the Hall of Legends

The biggest change with this month's update will be the Hall of Legends. We redesigned the interface a little to make it easier to use. Once you reach level 70/600 with your Hall of Legends you will be able to earn Sceats. These are only available from the Kingdom’s League. This currency can then be used to unlock new research in the Hall of Legends from level 650, including the Apiary, the Brewery, and the Shieldmaidens.

The bees are going to be busy: The Apiary

The ability to construct this building is unlocked in the Hall of Legends, after level 70/650. The building’s size is 5 x 5. You can build up to ten Apiaries in your castle. This building produces honey. The higher the building level the more honey it will produce.

If you have this building in an outpost when it gets conquered or is abandoned the Apiaries contained there will be returned to you.

You can demolish the building yourself.

Drink up and be merry: The Brewery

This building produces mead. It consumes honey and food and uses both of this to make mead. These are converted at a ratio specific to the buildings level. The higher the level of the Brewery the lower the consumption of both honey and food. You can define in the Brewery how much and at what rate you will produce mead. However once you’ve no more food or honey the production will stop. You can define this limit yourself meaning you won’t consume all your food unless you want to. If you have this building in an outpost when it gets conquered or is abandoned the Brewery contained there will be returned to you.

The Shield-maidens are a new unit that you will need to keep well supplied with horns of mead. Rather than consuming food like their lesser brethren this doughty maidens need the true ambrosia: mead. Keeping them in constant supply won’t be easy but it will be well worth it. The melee version has a base attack of 225, they’ll rip through your opponents. Oh and don’t forget their more distant sisters the Valkyrie Rangers. They are just as deadly with a bow! You’ll also have some new research in the Hall of Legends that’ll boost the abilities of both units. You'll be able to unlock these once you have the correct research and you've also upgraded your barracks to level 15.

Get ready for more Upgraded Buildings:

Each of the following buildings will now have an extra level which they can be upgraded with, increasing the benefits they provide:

Relic Troops are much cheaper now!

The costs for Relic Units will be reduced massively with this update. The new costs are shown in the table below. As you can see this is a massive reduction and we hope to see more of these fearsome warriors grace the battlefields of the Great Empire soon.