Permanent Outposts in Empire: Yes or No. 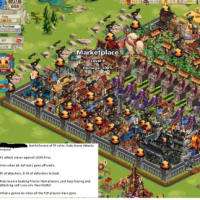 Pisky (GB1) GB1 Posts: 450
06.07.2021 in General Discussion
Permanent Op's:--------------1 OP----------------2 OP's-------------------3 OP's--------------
Should this suggestion be taken seriously now by the game developers.
Obviously I think it should be, and the only question would then be, should it be 1 op, 2 op's, 3 op's. I think by an open discussion on which choice would allow for all, players to have am opinion on the choice and how many. For the old school they will say 3 0p's, for Multi's and shell's, (well I think we know that), but why should it be 3.
I would prefer all 3 to be permanent, as this would stop Multi-Accounts, and shells, in their tracks. There would be no reason for these ghosts and shells, not that would justify as many creations anyway, and not without passing the full cost of upgrading them onto the creators anyway. Yes!, there are still ways around it like accounts being passed on, but it stops the use of Op's as collateral, and the more devious purposes that they have been used for.
Why should players put the revenue and time into updates and upgrades into these Op's, to see them taken away from them, unscrupulous players who say they are playing the game, but aren't. Many of us have had run-in's with these people, and know the type and reasons its done. For those that say why should Op's die when accounts die, why not!. That Op is someone elses hard work, time and money, so why should't it go. Better still why shouldn't GGe/Stillfront keep those Op's with the main castles. It wouldn't be hard. They already hang onto 4 castles, in case a player restarts, so why not a few more. Surely that would be a plus should a player come back after a rest, and if the cost is that the player buys some rubies at some time so be it, as long as GGE didn't try to make money on it and stop it happening.
I have never understood GGE's logic on it, as to allow Op's to pass on, or be capped, is to reduce the revenue available on when new one's are built, and takes away from new players learning the game, which happens a lot now. I really think this suggestion has some uses in keeping the game alive, protecting players assets long term, and allow protected spending by players in long term use of the game.
4
«12»