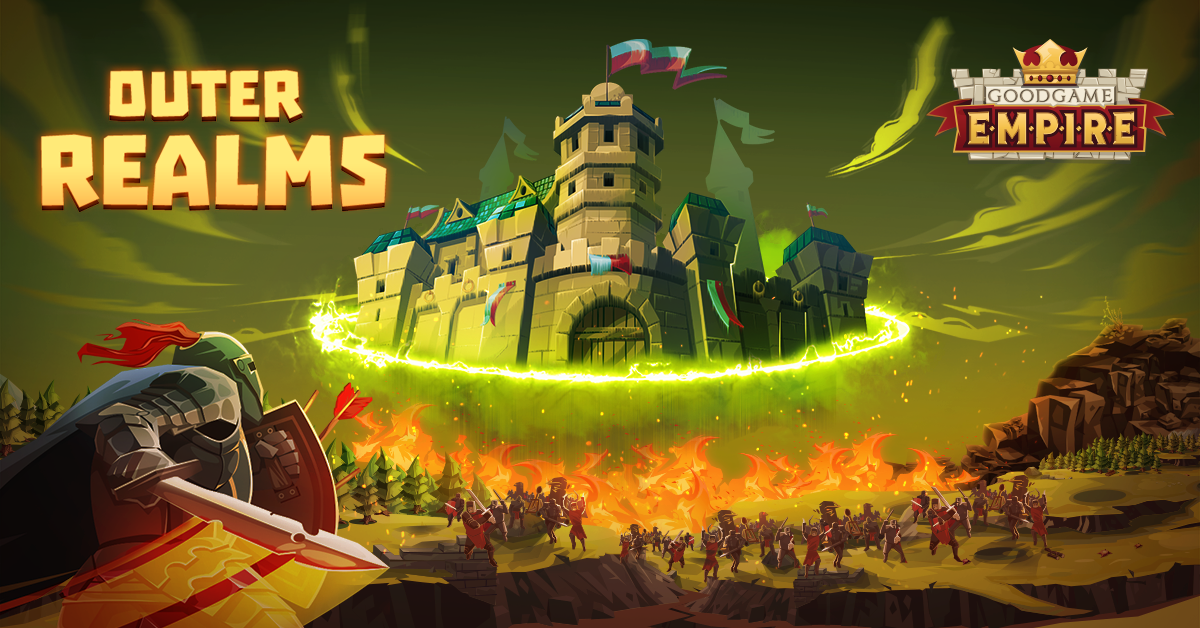 Brave warriors,
This upcoming update heralds the return of our Outer Realms event for another round of conquest and battles!

For this round, we’re also going to implement some new improvements to this event which are mainly focused on a new scoring system, but there also some additional improvements which will improve your troops and your castle! Let's show you what we mean by that:

We improved our new Outer Realms event in many ways, yet let us begin with the improvements that you'll notice at the very start of the event, right before you enter the Outer Realms:

In addition to our previously introduced pre-built level 11 castle, you’d also be able to obtain an improved version of this castle to start with, in our Outer Realms event: 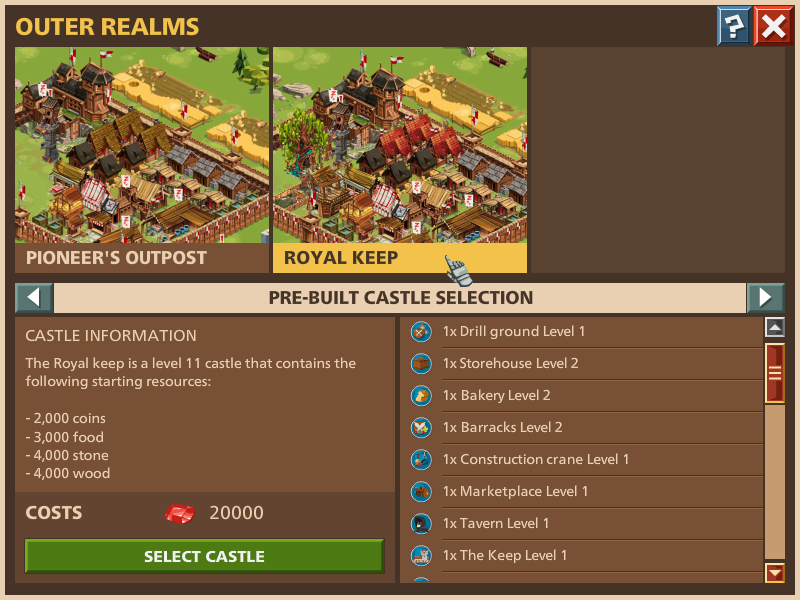 This iteration of our Outer Realms event will introduce an update to the way that our scoring system works, which can be seen in our newly implemented tab “Scoring Overview”

.
This means that our scoring system will get a second variation, which will be called the “Heritage Hunter”: 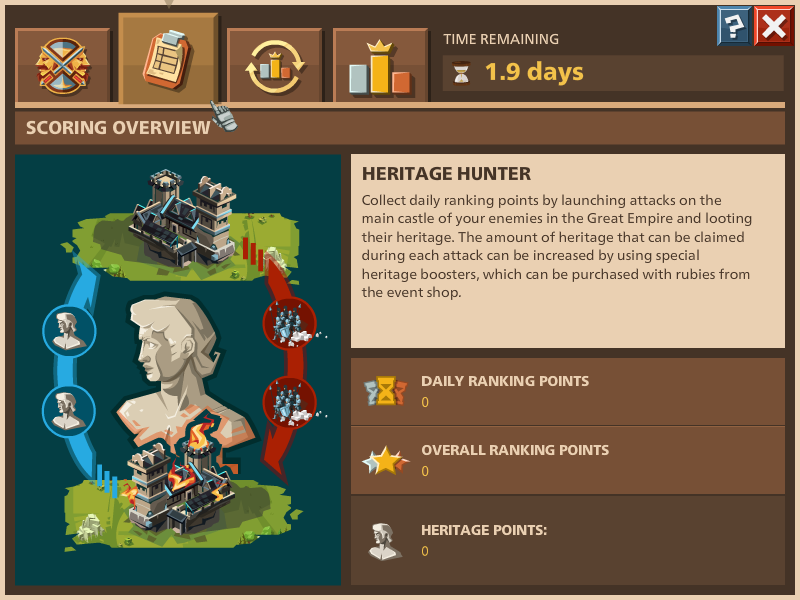 At the beginning of the Outer Realms event, players will receive a specific amount of so-called “Heritage”

Stolen Heritage Points can be increased by either boosters or so-called “Global Effects” - more on that later.

Collecting these points by stealing them from your enemies is the only way of increasing your amount of Heritage Points.

The way that attacks in this new scoring system work is also pretty much straight forward: Heritage will be looted like a normal resource after a successful attack on your opponent's main castle in the Great Empire in the Outer Realms. However, it will not count towards the loot capacity of your army.

As you can see in the screenshot depicted above, the new scoring overview tab will also show you both the number of your daily ranking points

We also improved on a situation where players with the same points received different rankings. This means, that players who have exactly the same amount of points in our rankings should from now on also hold exactly the same rank in our ranking lists! As an example, if two people have the same highest points in the daily ranking they will both be on the first spot and both receive 1000 points. The next person will be rank 3 and receive 800 points.

As mentioned before, we’ll also introduce brand new Global Effects to our Outer Realms event! These effects will provide you with a variety of bonuses like e.g. “Attack cooldown against kingdom NPC targets: -50%”.

The global server effects can be reached in-game via an icon with the name “Active global effects”, which will pop-up in the top right corner of your screen, provided that a global effect is running in the first place:

After clicking on this icon the following dialogue will be shown to you: 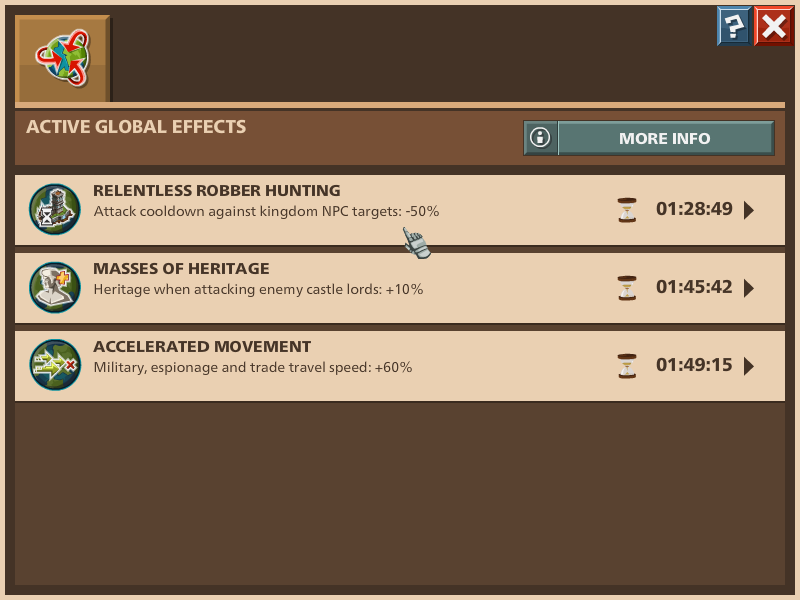 By clicking on, for example, the shown “Relentless Robber Hunting” global effect, you’re going to receive additional information about this effect, as shown by the next screenshot: 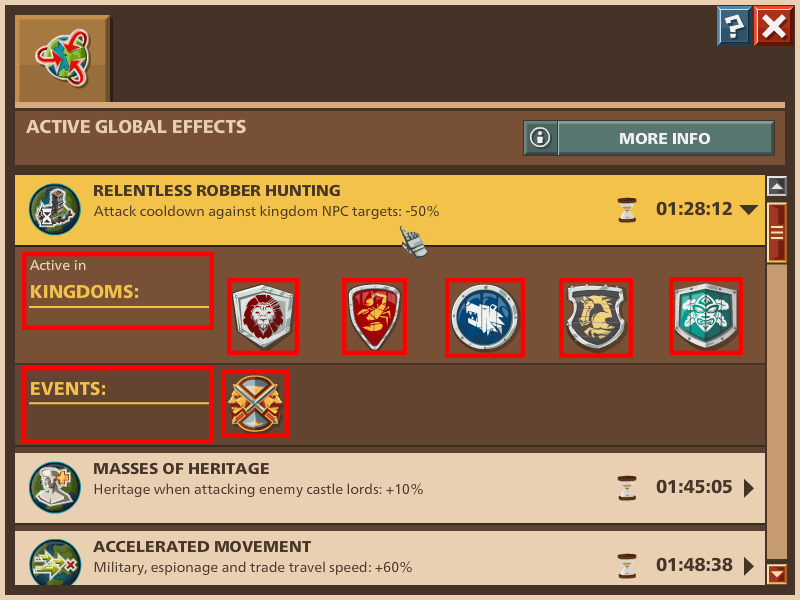 So as you can see, this dialogue will show you where each respective global effect will be active, in this case (“Relentless Robber Hunting)  in all Kingdoms, and in the Outer Realms events. Global effects will also have a significance for your future adventures, for down the road you’ll be meeting them not only in the Outer Realms but also on your main servers! Having said this, please be aware that only crests of currently running events will be shown to you in our global effects overview. What does that mean?

If you are not completely familiar with what crest belongs to which kingdom or event you can find a detailed list in the MORE INFO area on this screen.

The Outer Realms are all about direct confrontation with your enemies, you can now use the token rewards from the Outer Realms to produce even stronger units on your main server. “How?”, do you ask? Well, we’re upgrading your barracks building with 4 new levels!
You’ll be able to upgrade the levels of your barrack building up to level 9, with the help of the well-known upgrade tokens

. The barrack building will furthermore receive a new design, once you’ve upgraded it to a higher level than 5, as you can see in the following overview:

But, there’s also something quite important for your army coming along with these new levels, in form of new troops:

Each additional level for your barracks building will provide you with a higher bonus to both your amount of recruitable troops and recruitment speed. The “Relic axeman”

will be unlocked with barracks level 7 and the “Relic shortbowman”

will be unlocked with barracks level 9!

The Relic Barracks with the additional 4 new levels are connected to the Outer Realms, but they function as an upgrade for your barracks building on your main server.

For a short overview of what you’ll need for upgrading your barracks with the relic levels and what these will give you in return, please make sure to take a look at the following short overview:

Please be aware that the recruitment speed time, which is currently shown to you in the game, is not correct!
This was caused by a technical issue which we are going to fix and the numbers, which are mentioned above - in the relic barracks table - are the correct ones!

Our improvements are always influenced by the constant feedback that you’re providing us, so please keep on commenting and providing your feedback in your respective forums discussion threads.