Make capitals and metros worth having.

IronLord (US1) Posts: 119
16.07.2018 edited 17.07.2018 in Ideas, Suggestions & Feedback
Capitals and metros are one of the best things in gge.. or were. They were the reason wars were fought, (and rubies bought) Owning a capital or metro brought great advantages to whatever alliances were lucky enough to own one.. but now they're trash.
Metros give 250 food. While that might've been good 8 years ago, now, with lvl 14 base and ops capable of producing over 40k food per hour, theyre irrelevant.
Capitals are worse than irrelevant, because now they don't do anything.
I think gge could help revitalize pvp, and refresh one of the best features of the game, if they would update capitals and metros.
As for capitals, a unit slightly stronger than spearwomen/berserkers (maybe equivalent to travelling crossbowmen) would be appropriate. Or even demons, so long as theyre expensive to train.

In addition, a few more metros and capitals could be added to the map, to incite some fighting.

-EDIT- 8k was a troll. Originally had 2k but decided it was too much so I changed to 8k while i thought of a better solution.
What i think is metros should be like farmhouses, where the more you have the less they produce. One might give around 750, while having as much as misc has would result in maybe 4k, with each additional giving successively less.
Post edited by IronLord (US1) on 17.07.2018
-=Fluffy Unicorns=- 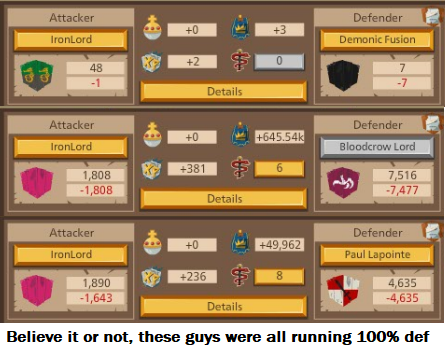