Hi noble lords and ladies from the world of Empire

I am Muffins 2.0 from Asia1 server

Is currently in search of experienced and able players from the world of Empire to join Asia 1 and make Drunken Fist the most powerful of the alliances here!! Asia1 , as you might know is a small server with a handful of players, well, worth a match, it is a server where you grow fast, you top events fast and you get familiar with alliances and politics fast 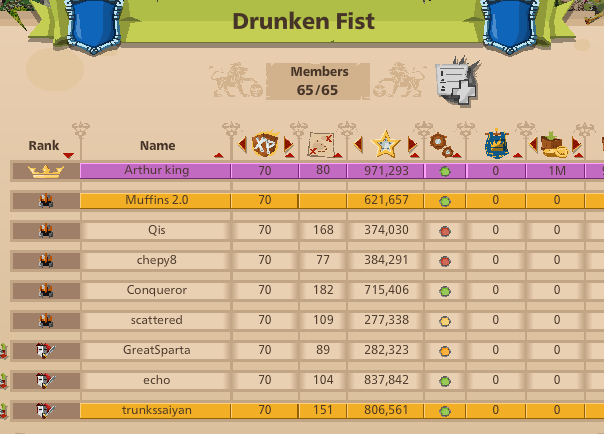 Founded in the year 2013, by a veteran named Kas and his wife Jyn, Drunken Fist was the first and one of those few alliances who set their foot on Asia1. He it strived, and through the able leadership of the founder and the loyalty of the members, in a few months time it became the top most alliance on the whole server, possessing all the royal towers, capitals, metropolises, etc

In winter 2015-16, Drunken Fist's power was challenged by fellow alliance on our server, and the result of the war, which were in Drunken Fist's favour, made it the unchallenged ruler of Asia1

In the coming months however, the founders and the old leaders, started to slowly leave the alliance, and with new an inexperienced players, Drunken Fist was growing steadily weaker, on the other side, their rivals were doing their best to become the unrivalled Lords of the server, consequently, in winter 2016-17 server war, after defending its place for a good deal of time, and due to internal problems, Drunken Fist was left defeated and exhausted at the hands of powerful russian and Italian players who fought in the server war. But defeat was a word unknown to Drunken Fist , and still is, for this very reason, we are trying our best to rise again, and prove that it was'nt only time which held us on the top positions, but power and talent.

If anyone is interested in joining Asia1 server and becoming a part of this great cause, please contact me, or our leader Arthur King.

Message me personally on forum / or game.