Zenzer (GB1) GB1 Posts: 2,713
23.09.2019 edited 23.09.2019 in Ideas, Suggestions & Feedback
Why is it that the game continues to increase in complexity and difficulty of understanding?
Every update nowadays always introduces new features which has all these extra steps to them that we don't need. In this case the added complexity only adds more annoyance and frustration to the game.

I get the idea that the developers wants to add new things to the game to make the game feel "fresh" or "enhanced". But there are other ways to do exactly this that doesn't involve the idea of creating something brand new everytime. Redesigining old and already existing game assets can make the game feel as "fresh" and "enhanced" as brand new original assets can, subtracting the extra annoyance and frustration that comes with it as you don't have to learn something new from scratch. 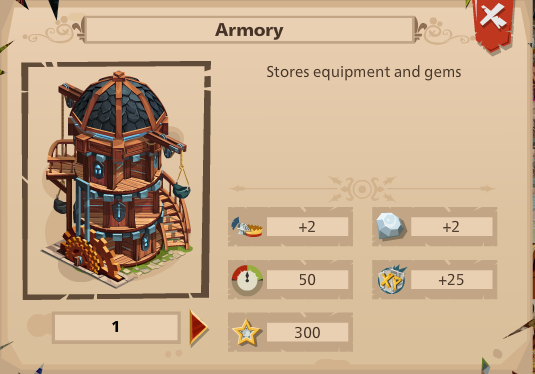 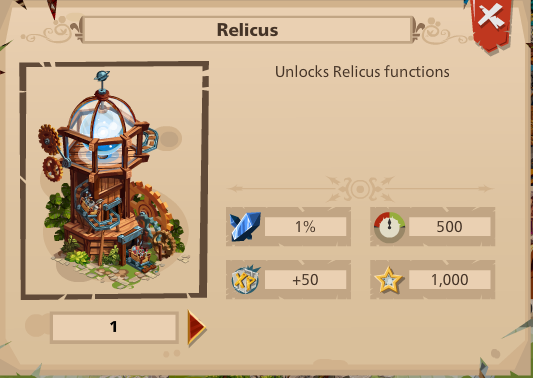 Was it really necessary to introduce two brand new buildings just to make increased equipment storage and relic enhancements possible? There are much better ways in which these things could be incorporated to the game. 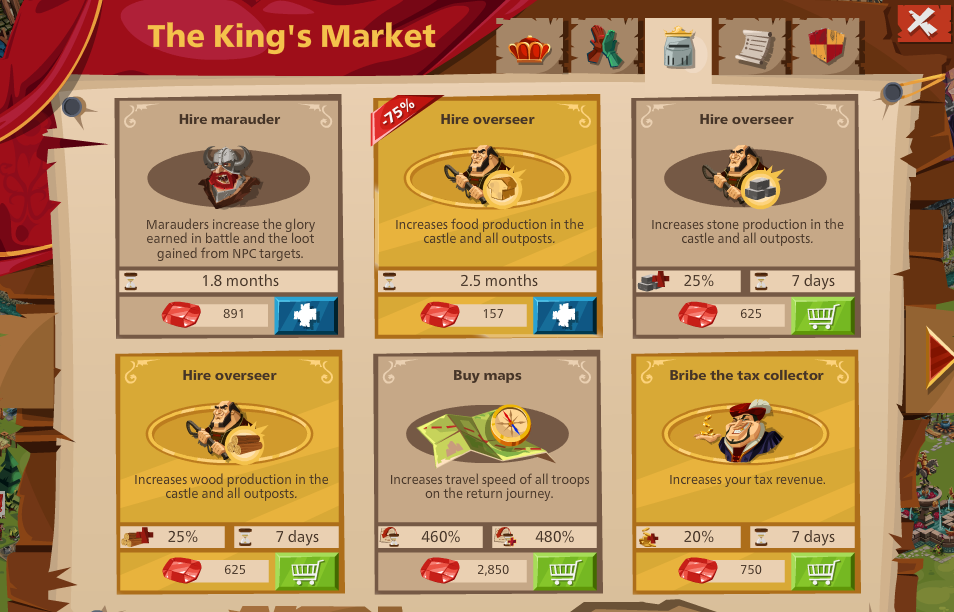 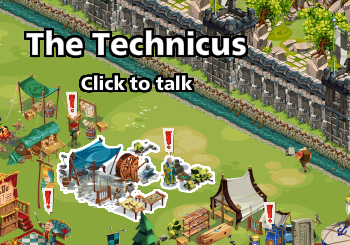 As for the armory, it shouldn't have existed at all to begin with. Just give all players the maximum storage by default.
IF it is an absolute must to have purchaseable extra equipment storage then just put it in the same kings market where the improved market barrow capacity and return speed exist.

3. Too many tools in the game

It doesn't make sense to have 4 different tiers of the same exact tool with minimal differences between each other.
For example: Look at the nomad chest tablet boosters. We have 4 different nomad chests. Why can't we just have 1 like we used to. The 3 extras doesn't add any more value to the game, it just makes things look overly complex.

Players now have to look at these 4 chests and decide, which one should i get? Or which one of these 4 should i put in my attack?
Annoying questions that we'd rather not have to think about. We just want to buy our boosters and use them, simple and straightfoward, no questions asked.

This is not limited to nomad chests only. I think the same about the samurai and glory tools as well.

The solution i think is pretty straight forward. Cut down on the amount of tool types and stop introducing more of these. If you absolutely must introduce new tools, then do it small, don't throw in 3 new nomad chests out of nowhere the first thing you do. The decoration forge i must say is still a disaster yet today in terms of how it's designed. Despite the developers efforts to improve it and despite that this is a feature that has existed for a long time now.

I still know of many high level players yet today who doesn't understand this feature and thinks it's frustrating to deal with and to try and understand.

Don't get me wrong, the decoration forge is extremely simple. All it does is increasing PO of your desired decoration, but this feature is designed in a way that makes it look like some sort of highly advanced timemachine. 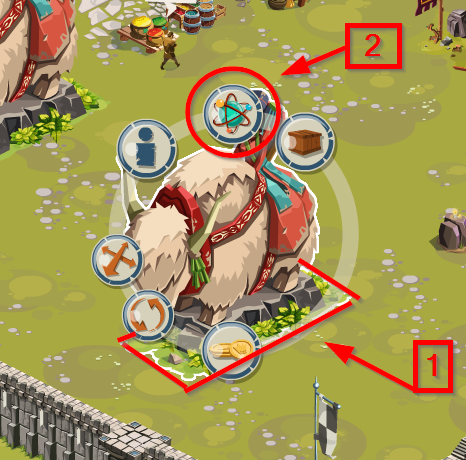 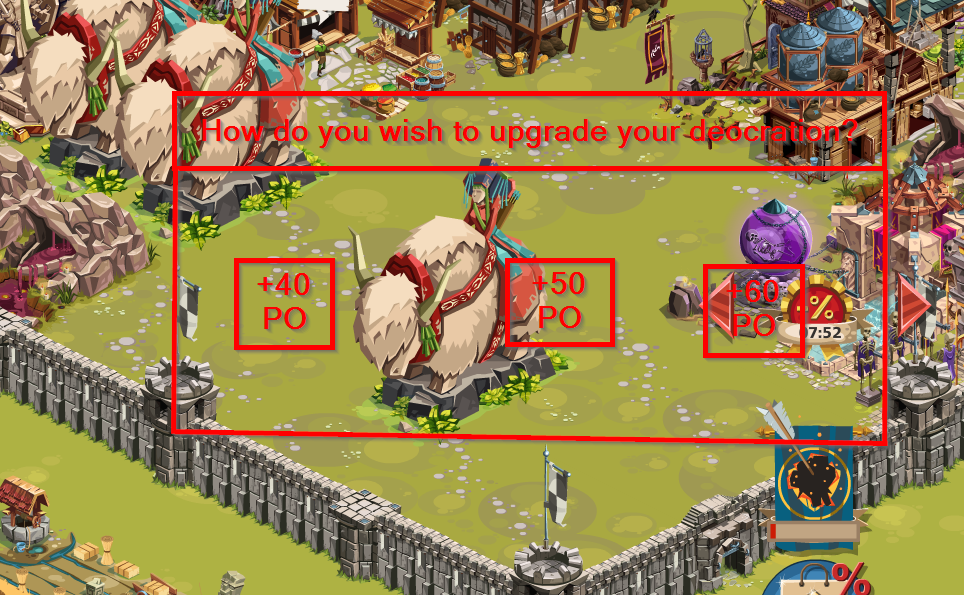 How it's used and the process

1. Click on a decoration.
2. Click on upgrade
3. An interface pops up where you can choose how you want to upgrade it and by how much
4. Choose how much PO you want to upgrade the decoration by, based on which consumables you have available.
5. After you selected how much and completed the upgrade +X amount of PO will be added to your decoration. You can also add some sort of animation or special effect when upgrade is completed to make the whole process more intuitive and pleasing.

These consumeables you could earn from events, top rewards, alliance rewards? Anywhere that's appropriate.
Straightforward, functional and satisfying with no learning curve required.

Today, whenever a new event is introduced there is always this steep learning curve trying to understand how it works. Like for example i still yet today haven't 100% got the gist of the new samurai event 2.0 with the Daimyos extension. I'm sure it's the same case for many others as i have noticed that the participation in the Daimyos is low on my server. The low participation could very well be because the Daimyos aren't really worth doing, but i don't think this is the only sole reason.

I know it was similar with the Kingdom league event.

Why can't there be improved tutorials and information available for these events? 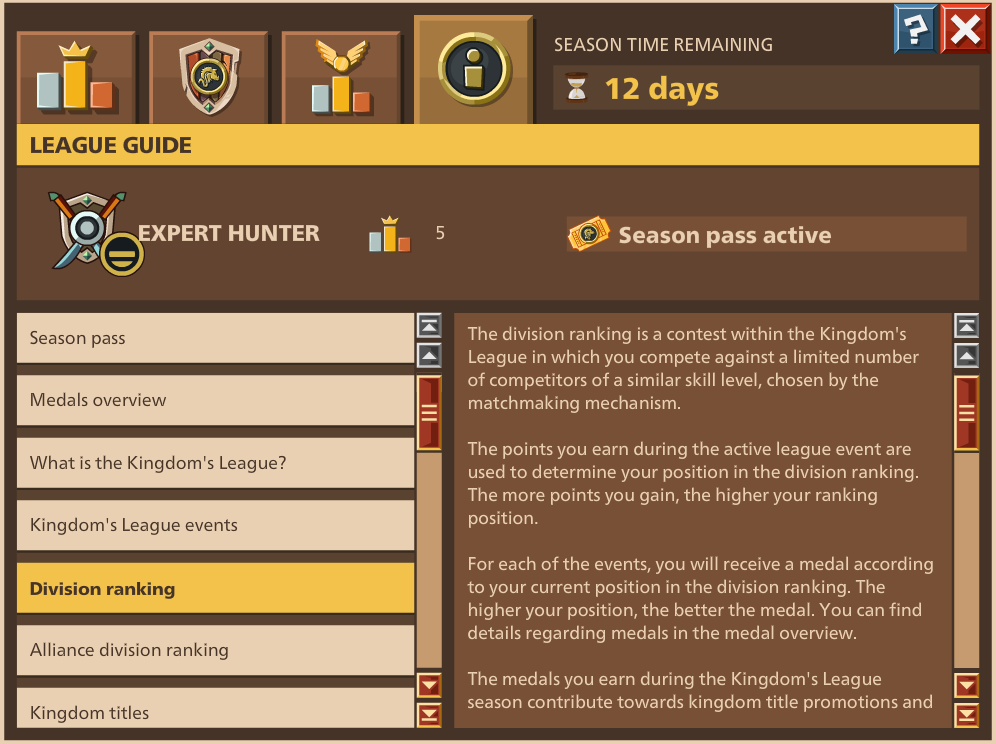 Currently we have these huge FAQ's for some events. But they are clogged up with huge piles of information. It's like reading a big instruction manual. Isn't there a way to simplify and compress all the information into one simple read?

What if the first time you ever opened the event, you are introduced to a simple tutorial that shows you how everything works. Similar to the tutorial new players get when they first create an account. Optional of course with the ability to be able to go back to it whenever you want.

Since the events have became such a staple in this game, making sure that every player understands the in and outs of the events is of most importance if you want to keep the players interested. What i presented above are only ideas, whatever the idea may be, i feel that something needs to be done to simplify the learning process of the events for first time players.


6. A new introduction screen for players who reach level 70 for the first time

I have noticed that there is a small amount of users out there who are discouraged from the level 70s because of it's complexity and difficulty of understanding. As soon as they reach lvl 70, they either quit the game or make a new account. Problem is that the level 70s are too overwhelming as there are so many new things and so much that you need to learn and understand in order to fully master it.

Please create an introduction of some sort to fresh lvl 70 players explaining everything. All the new legendary levels and how they work. All the new legendary buildings and what they do. Along with any other things that makes lvl 70 special compared to what these players are normally used to.  Maybe even a little congratulations to the player reaching this level?

Right now reaching lvl 70 feels as a punishment for many as you are thrown in into a new way to play the game with no explainations or introductions available for you to access with ease. Reaching level 70 should feel rewarding and that you actually achieved something big and great.

It still frustrates me to this day. Everytime i have to go and sell my equipments when storage is full. Selling one at a time. I have now stopped selling my equipments when storage is full because it simply became too much. Why isn't there a way to select multiple of them? There was this great solution to this problem introduced to the game that allowed you to auto-sell equipments. Unfortunately this feature was put behind a paywall. Why are you intentionally annoying your players? You are giving me these equipments i don't want and then trying to make me pay money for a solution on a problem you guys created.

On the topic of annoying your playerbase, we have all these constant pop-ups in the game. Now they even appear in our mailboxes. I personally don't believe in the idea of forced exposure of ads in a game like environment. It discourages new players to the game, making so that the game loses new potential costumers but also helps with increasing the rate at which the playerbase is shrinking. The older and already established players will not stay in this game forever. Some day these players will leave and someone will have to take their place. The developers needs to do a better job with attracting new users to the game and making the established players want to stay longer.

For example, have you ever clicked on a link that took you to this site that gave you 3-4 pop-ups the moment you finished loading it? I don't know about you but i personally click away from them and don't bother unless it's something very important.

Ending this epidemy of forced exposure of advertisements is step 1 to making the game healthier and more attractive.

I feel that there is way too much going on when it comes to the main screen.
Like for example why have all these event icons stack on top of each other? Can't we remove all these icons completely and give them their own interface/drop-down menu? These icons makes navigation in the game frustrating.

Same with the subscription button.
Why make it so large? You could have just put it in the kings market or the ruby shop except for making it an oversized button covering up a small portion of the screen.

Two horns aren't enough to cover all the different types of incoming attacks that exist.
I don't know how many times i have seen a red horn, clicked it and what i see is an incoming NPC attack or a shapeshifter attacking with 32 units. Can't we get to know directly what is attacking us instead of making us have to go out and investigate ourselves?

All of these would be great additions to the game.
Note that i didn't mention the blue horn because it's already good as it is.


11. Categorize all the items in the vendors

This is something that already exists in the Armorer. ^ 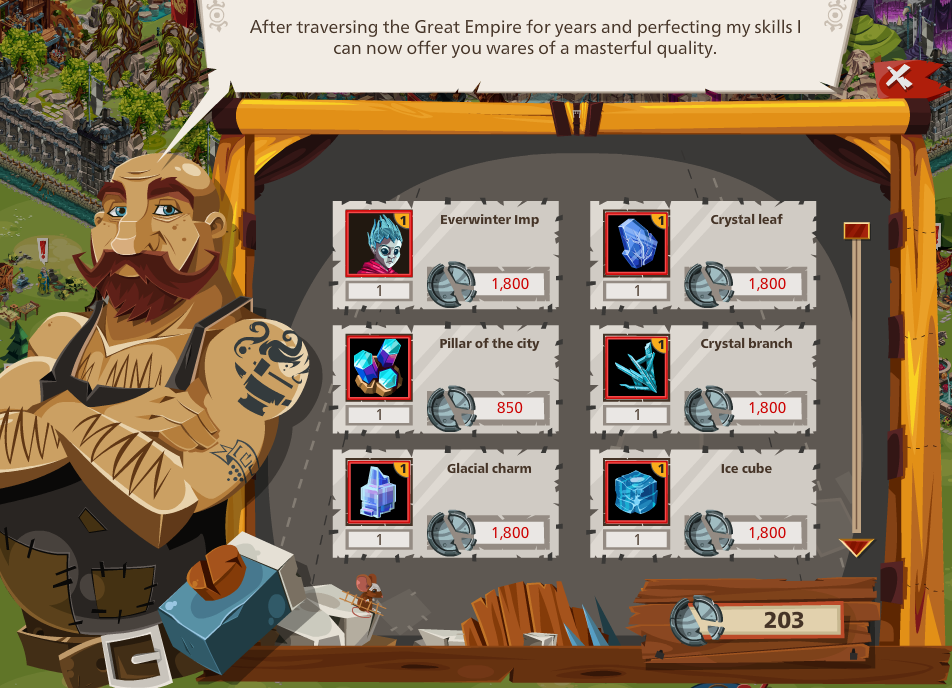 Please divide more vendors into different categorizes for ease of access like you've already done with the armorer. The blacksmith is the most important one as navigating it is a nightmare with so many items. 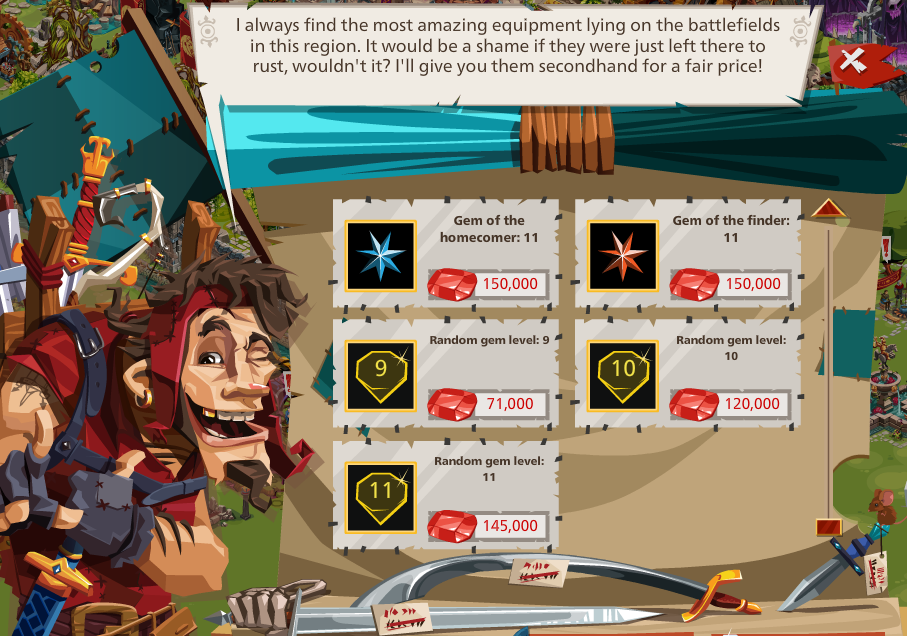 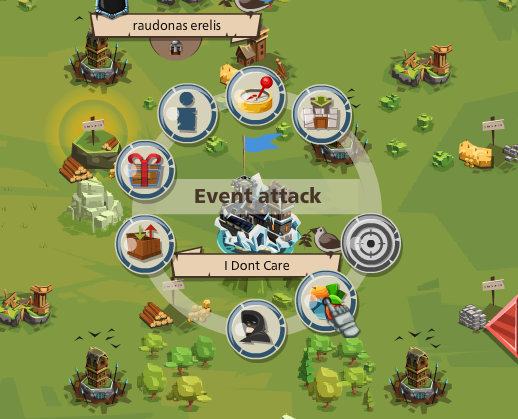 It happens every event that people click on the wrong button and accidentally launch a real attack instead of an event one.

Please try and make it more obvious that you are sending an event attack instead of a normal one.
For example, you could give event attacks a green arrow instead of the normal red one. 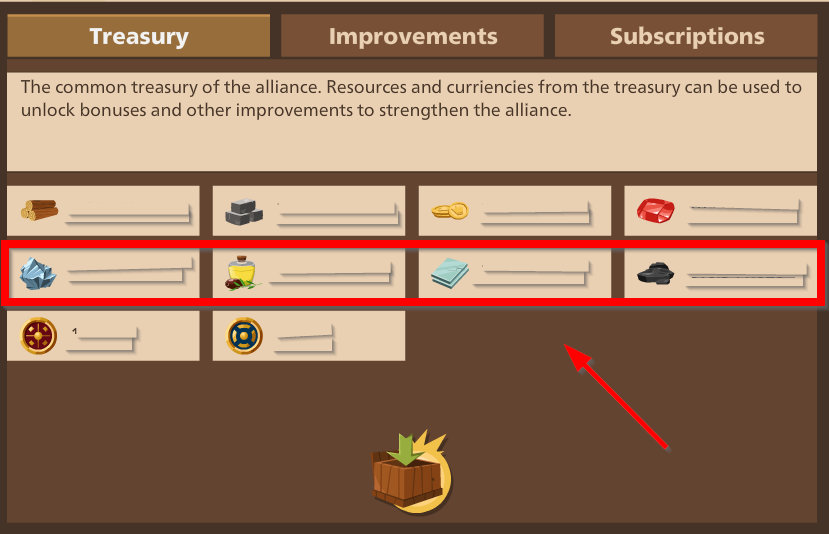 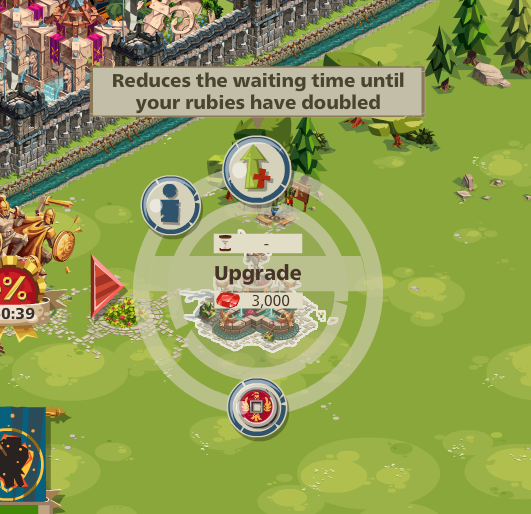 The wishing coins were removed from the game, but why have you guys still not removed the wishing well?
Remove it and refund the costs or at least disable it so that people can't upgrade it and waste their rubies. We were told that the wishing well would get a rework. Many years later, no rework. I don't expect this rework to appear this year, i don't expet it to appear next year either.


I know there is more than this, but at this point the thread is already too long so i'll simply end it here.
I wrote all of this in one go so expect some errors here and there.