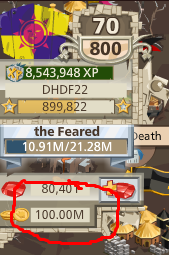 Wasn't an easy goal to achieve, was wondering if anyone out there has reached this milestone. No reward for it, just wanted to see if I could