Update: Leprechauns, shamrocks and the return of Berimond!

We would like to present to you our latest update patch notes;

It was the main topic of discussion for a long time, we had several tests to make sure the long standing problems would be fixed and now it’s time to see Leopold and Grimbert battling it out for the throne again!

Expect leprechauns, shamrocks and pots of gold, but most of all a new version of the Robber Baron’s King! 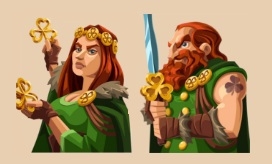 The update should take place tomorrow between the usual time of 10:00am and 01:00pm CET.