Noble Leone (ASIA1) Posts: 1,633
08.01.2016 in US Migration Content - Community
Requirements to Play: Two or more players, war tools and troops, and a written agreement (advisably submitted to the public) between the players detailing the rules/regulations of the joust.

The Purpose: To play an exciting game without the pressures and stresses of war.

Basics: In this game you set up a "Jousting mach" (a staged war between two or more players that have agreed to each others terms and conditions) then you attack each other with the goals of:
a) learning from experience
b) gaining  loot
c) gaining XP points
d) gaining honor/glory
e) to have a good time
f) to settle a personal score that doesn't involve your alliance
g) any other personal reason

Rules of Engagement: You must agree with your jousting partner before beginning the joust, breaking of these conditions can lead to any punishment that the other player(s) sees fit. The two or more players competing in the joust agree on the terms of the joust on this thread or in the game through PM.

Everything else is self operated in this game, the details are made up by the two or more people jousting in the game and are followed throughout the joust until one of the players stops, becomes unable to joust, or calls foul play on another player.

Good luck to everyone, and may the better man or woman win! 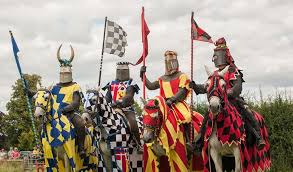