Decoration Competition! ....... AND THE WINNER IS? 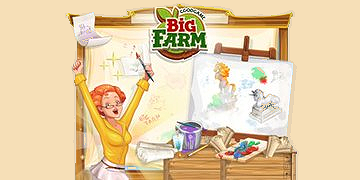 We know you all love your decorations, whether you are a statistics fiend with only the best value decos on your farm, or if it’s all about the look for you, they are an important part of your farming life. We would like to give one lucky farmer the opportunity to make their farm that little bit more personal and invite them to help us design an all new decoration! That’s right, we will hold a competition that allows one lucky winner to be a part of our design process and to bring a decoration to life.

A Co-operative Hard Worker Event will begin on the 1st of February and end on the 4th of February. At the end of this event, the top 100 players from each server will be entered into a draw. One name will be selected and the selected player will get the chance to speak directly with our Art team to design the decoration. The winner will receive the newly designed decoration for free, along with all members of their Co-operative!

The decoration will be a maximum of 8x8, and while the Happiness and Village Happiness will be determined once the final design is created we intend to give it a medium to high happiness value. The winner’s username will also appear in the decoration description, immortalised for all time! The final decoration name will be chosen by us as the name must be localised into multiple languages.

There must be a couple of limits to the decoration and so here are the guidelines for the winner:

More detailed terms can be found below, but the general competition rules are as follows:

At the end of the event, the winning player will be contacted by our team via their registered in-game mailing address, so please ensure you have a valid and registered address for the game so that we we can get in touch with you. If you do not have a valid email address you will not be eligible and a new winner will be selected. We will also announce the winner via the forums, so make sure to check back to see if you won! After some Skype consultations with the art team, they will work on the winner’s proposed idea and we will present the final design in the forums, along with providing the item to the winner and their co-op members.

You can find the terms of this competition below. Unfortunately we are only able to provide these terms in English and apologise for the inconvenience.

This discussion has been closed.
Back to Top
Sign In
New Discussion