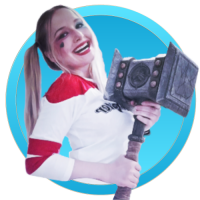 Big Farm ("the game") is an online browser game developed and distributed by Goodgame Studios ("GGS"). The game can be used by you as a User ("player") via computers, mobile devices, consoles, access points to the Internet, virtual or real networks ("means of connections") and can be played under certain game rules ("the rules") to ensure a fair game play experience for all players. As a player of Big Farm, you may register an account allowing you to access multiple game servers ("servers"). The rules are defined by GGS and applied by the support and community team of GGS ("the team"). By registering an account on the game, you are committed to follow the rules. The team will ensure that the terms of the rules are met by warnings and punishments ("bans"). A player that has bought premium currency will be subjected to the same rules and bans as all other players.

1.1 The game is intended for players of 16 years or older.

1.2 The game is a product that is always under development and cannot be considered a final product. Errors may occur within the game. Exploiting errors or bugs within the game to a players or Co-Ops advantage is forbidden.

1.3 Any exploits or bugs encountered in the game should be immediately reported to the team.

1.4 All disputes about rules breaches in the game are the responsibility of the team.

1.5 Decisions made by the team are final.

1.6 All abuse of the support system will result in a ban from the system.

1.7 A player is not eligible for a refund or reimbursement on premium currency and or premium services if they have been banned, if they delete their account or if accounts are deleted on their behalf.

1.8 GGS may change these rules subject to an announcement detailing such at any time.

2.1 Players are expected to conduct themselves in a respectful manner throughout their time playing the game. This applies to all aspects of the game including but not limited to communications within the game.

2.2 Advertising services are not permitted within the game.

2.3 Content communicated or used within the game such as but not limited to physical threats, cyberbullying, stalking, pornography, extreme politics, racism and unlawful behaviour will be communicated with law enforcement agencies in the players local jurisdiction.

2.4 Players may not create nor use an inappropriate username or avatar. This includes but is not limited to the use of names containing profanity, sexual references, hate speech language or anything related to political figures. You may also not use a name containing “Big Farm”, “GGS”, “Support” or any other name that impersonates a GGS employee. Additionally, you are not allowed to use names that are visually identical to existing players by using spaces and similar looking characters in the name.

3.1 As a player you are responsible for the security of your game account. You must not disclose your account details to another player. GGS does not accept responsibility for damages caused to your account if they are accessed by a third party.

4.1 The use of automated processes within the game is forbidden. The use of bots, scripts, macros and/or proxies is not allowed.

5.1 Exploiting any game feature as it was not intended to be used is not allowed.

5.2 Exploiting a game account to the detriment of other players' game experience or enjoyment of the game is not allowed.

5.3 Exploiting game accounts or game features for the purposes of fraud is strictly prohibited.

5.4 Players may use multiple accounts within the game where these accounts are not used to manipulate or exploit game mechanics

5.5 Multiple accounts need to be uniquely named and may not be used to generate a competitive advantage over players using a single account.

5.6 Players using multiple accounts in order to exploit game mechanics will be subject to a ban on all accounts.

5.7 Players may not use multiple accounts to send multiple attacks or sabotages on a single target.

5.8 The same 3. Account security rules apply to Multiple Accounts and access details may not be shared with other players.

6.1 These rules are an extension of the existing Terms & Conditions and as such must be adhered to in the same manner. The valid Terms and Conditions can be viewed at https://goodgamestudios.com/.

6.2 In the event that a situation is not covered specifically by these game rules, then support reserves the right to make the final decision taking the Terms of Service into account.